History of the Stearns County League

Baseball had been an important pastime in Central Minnesota since the 1920’s.  The Great Soo League was the area’s first organized league, beginning in 1926 and lasted for 40 seasons.  Some of the Stearns County League teams had their initial seasons as part of this well-known league.

Most of our local amateur teams had their beginnings in the 30’s.  St. Martin was the first current member of the Stearns County League to have an organized team, playing its first season in 1929 as part of the Sauk Valley League.  New Munich has its debut season in 1930 as a member of the Great Soo League and was the only current league member to field a team in 1931 and 1932.  Elrosa had its first team in 1933 as part of the Central Minnesota League.

In 1934 the first league to take the name Stearns County League was formed.  It included only two of its current members; St. Martin (which played only two seasons in the now defunct Sauk Valley League) and Richmond which played its inaugural season.  Other teams in the six team league included Cold Spring, Albany, Melrose, and St. Anthony.  (Cold Spring and Albany already had other teams in the Great Soo League).  That Stearns County League lasted through the 1936 season.

In 1937, New Munich and Richmond had teams in the Great Soo League and only Richmond fielded a team in 1938.

In 1939, another league known as the Stearns County League began and that included some more of its current members.  First year teams included Lake Henry, Farming, and Roscoe.  St. Martin which did not have a team in 1937 & 1938 was part of the league as was New Munich, which had left the Great Soo League after the 1937 season.  Elrosa left the Central MN League to join and Spring Hill had a team for one season as part of the league in 1939.

In 1950, the new league was formed and it was called the Central Stearns (for the first three seasons).  It was made up of Lake Henry, New Munich, St. Martin, Farming, Roscoe, Elrosa, Regal, and Green Grove – which was the two communities of Greenwald and Meire Grove.

Elrosa lasted only the first season and was replaced by Freeport.  Regal left the league in 1953 and was replaced by Richmond.  Then in 1959, Freeport folded and Green Grove was split into the separate teams of Greenwald and Meire Grove.  The league stayed the same from 1959 until 1983 when it expanded and added Elrosa and Spring Hill to form its current 10 team league.


Regardless of when the league officially began, it’s doubtful there has been a more stable league anywhere in the state.

Following are the standings based upon information contained in the St. Cloud Times.

All information gathered by: David Schneider

Note: the information has been gathered from the St. Cloud Times stored on film at the St. Cloud State library.  The earliest year film existed was 1928 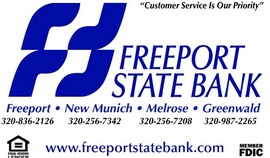